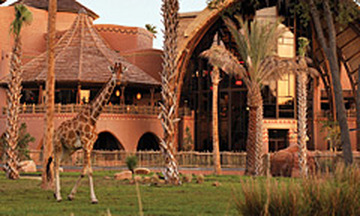 Disney’s Animal Kingdom Villas are themed in the spirit of Africa and boast spacious rooms that have kitchens or kitchenettes as well as multi-bedroom units. While staying at Animal Kingdom Villas guests have the opportunity to see over 30 species of animals including giraffes, zebras, and okapi. The Villas also offer guests the chance to have a room with a view of these African savannas where the animals roam.

The villa rooms are located in the Animal Kingdom Lodge on the 5th and 6th floors. The main building is called the Jambo House, while the other section of the Villas is called Kidani Village. The lodge is designed in a semi-circle which allows many of the guest rooms to have a good view of the savanna and the animals that live there. Authentic African artifacts are used in the lobby and throughout the resort. Arusha Rock, located just off the lobby, gives excellent views of the animals as well as the plant life of the savanna.

The Uzima pool at Animal Kingdom Lodge is 11,000 square feet and has a 67 foot long slide. There is a small pool for little children, animal themed activities, an arcade, and a 24 hour playground. There is also a kids club, Simba’s Clubhouse, which is a supervised area for children ages 3-12 if the parents want a night on their own.

This resort features two of the best restaurants in all of Walt Disney World, Jiko: The Cooking Place and Boma: Flavors of Africa. Reservations are strongly recommended when attending one of these excellent restaurants. Also, the award winning restaurant Sanaa is located at Animal Kingdom – Kidani Villages. 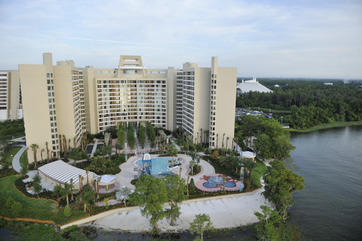 The newest addition to the Disney family of resorts is Bay lake Tower at Disney’s Contemporary Resort. This building features large rooms all the way up to multiple bedroom villas as well as kitchens. Disney’s Contemporary Resort is one of the icons of Walt Disney World as it sits close to the Magic Kingdom and has the monorail running through its main lobby. This hotel has excellent views of the Magic Kingdom including Space Mountain and Cinderella Castle. The hotel is also known for the outstanding dining experience of the California Grill, located on the 15th floor. The main contemporary tower is where most of the facilities are located including the front desk, the monorail station, restaurants, and several shops.

The resort has a marina where watercraft can be rented, two pools which have large slides, a health club, tennis courts, and convention space. There is a sand beach next to the pool which allows for the best in relaxation as well as a massage station. Fishing excursions are available at the marina and a 24 hour high tech arcade is also available at the resort.

The convention center has over 115,000 square feet of meeting space and ballrooms. Bay Lake Tower at Disney’s Contemporary Resort is located within walking distance of Magic Kingdom Park and just a monorail ride away from Epcot. 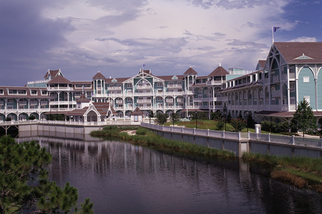 Disney’s Beach Club Villas is a deluxe villa resort located alongside the 25 acre Crescent Lake and is themed after a New England style resort. This resort features villa style accommodations that will sleep up to eight people in certain rooms. Stormalong Bay is one of the highlights of this resort as it features a large pool, waterfalls, a circular river, a waterslide, a tanning deck, and Hurricane Hanna’s Grill a poolside bar and counter service restaurant.

This resort features over 550 guest rooms that are decorated with a beach side theme and show views of the resort, gardens, or Crescent Lake. The white wicker furniture is an excellent part of the theme as well as the beach style color palette. The resort features Yachtsman Steakhouse, one of the most unique restaurants in Walt Disney World as you get to see the chef’s preparing steak, chicken, seafood, and lamb. The hotel features a 24 hour health club with saunas, steam rooms, and massages. There are three quiet pools and seven spas throughout the property as well as a white sand beach alongside of the lake on which guests can relax. The resort also features a full arcade for the enjoyment of all guests. The Sandcastle Club is a facility for kids ages 3-12 and is supervised to allow parents to have a night out. 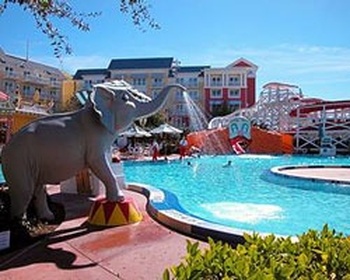 Disney’s BoardWalk Inn is a deluxe resort that is themed after 1940’s Atlantic City. This resort features villa style accommodations that will sleep up to eight people in certain rooms. The BoardWalk is packed with entertainment and is situated alongside of Crescent Lake. The midway games and street performers are located along the BoardWalk and add to its carnival atmosphere.

The guest rooms are decorated with the Atlantic Ocean beaches in mind and have cherry wood furniture. The main Luna Park pool is great for kids and as well as the 24 hour playground that is located close by. The pool includes a 200 foot long Keister Coaster water slide. In addition to the main pool the resort also features two quite pools.

The entertainment on the BoardWalk includes the ESPN Club, Cat Cora’s restaurant Kouzzina, and the Big River Grille & Brewing Works. 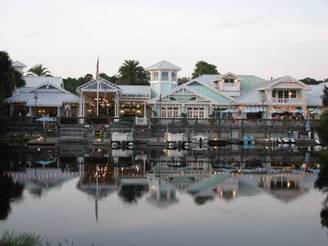 Disney’s Old Key West Resort is located in the Downtown Disney area is brings about a sense of romance that comes from the Florida Keys. The resort is also situated amidst palm trees and right next to the Lake Buena Vista Golf Course. Old Key West is made up of studio rooms as well as one, two, and three bedroom villas which include kitchens and access to laundry facilities.

The Hospitality House is the main building that has a lounge, arcade, and shopping. The health complex is next door to the hospitality house and features, tennis, swimming, and exercise equipment as well as a massage center. There are four pools throughout the resort, one of which has a large water slide and a children’s play area along with spa. Olivia’s Café is a restaurant serving Florida seafood and American food all with a little Caribbean twist characteristic of the Florida Keys. The Conch Flat Community Hall also offers foodball, ping pong, arts and crafts activities, sandcastle building events, video game tournaments, and board games all for the enjoyment of adults and kids alike. 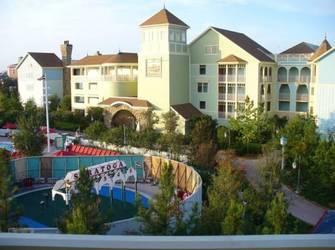 Disney’s Saratoga Springs Resort is a Victorian themed villa resort that is located on Village Lake. The resort also includes the Treehouse Villas, which hold up to nine guests in “treehouse” like cabins among the trees. This resort was inspired by Saratoga Springs, New York in the 1800’s. Famous for its spas and horse racing the resort is very alluring with its green rolling hills and calm lakes.

The resort has buildings in six sections, The Springs, Congress Park, The Grandstand, The Carousel, The Paddock, and the Treehouse Villas. The villas offer kitchens and washers and dryers making guests feel like they are right at home. Some of the three bedroom villas are even large enough to hold up to 12 people, making them great for large family getaways.

The large High Rock Spring Pool has great rockwork, a water slide, and waterfalls. A health club is available which includes workout equipment, steam room, sauna, and whirlpool. In addition a full service spa, with massage service is available. Also, included on the property is the Turf Club Bar and Grill which serves delicious American style cuisine. Children at Saratoga Springs are presented with two playgrounds to keep them busy, while kids and adults alike will enjoy the high-tech game room, basketball courts, shuffleboard, and bike rentals that are available. Community Hall also offers ping pong, arts and crafts, board games, and foosball.

The Villas at Disney's Wilderness Lodge 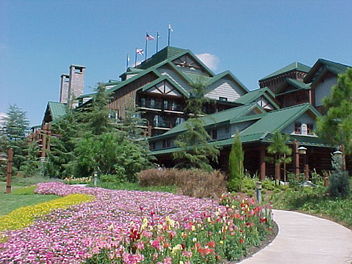 The Villas at Disney’s Wilderness Lodge are located in a tower adjacent to The Wilderness Lodge. The villas feature some amenities of home such as a kitchen or kitchenette.  Rooms are featured that sleep up to eight people in multi-bedroom villas. The Great American Northwest National Park is the inspiration for Disney’s Wilderness Lodge. This deluxe hotel was built in honor of American artistry and craftsmanship as well as to celebrate wilderness and the great outdoors. Wilderness Lodge carries the theme of staying in harmony with nature. The décor also tends to pay tribute to the Native American culture that has helped shaped America. One of the key points is the 82 foot fireplace in the lobby as well as the Lodgepole Pine that decorates the building.

The resort also features the Fire Rock Geyser, which was designed with Old Faithful from Yellowstone National Park in mind. Water comes out of the Fire Rock Geyser and shoots over 120 feet into the air. The large pool is complete with a water slide and 24 hour playground for children. Also, a white sand beach allows for the ultimate relaxation on Bay Lake. Bikes and watercraft are also available for rental at Wilderness Lodge.

Also on the Wilderness Lodge property are two excellent table service restaurants. A family style barbeque restaurant, Whispering Canyon Café, features a menu as well as all you can eat fare. Artist Point is a deluxe dining restaurant that features an award winning wine list as well as specialty food from the Pacific Northwest.

The Villas at Disney’s Wilderness Lodge are located close to Magic Kingdom Park, which can be reached by boat.
CLICK HERE for a free Disney vacation quote from Big Dreams Travel.