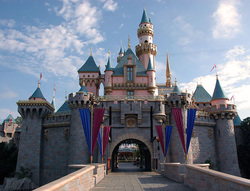 Since it’s opening in 1955 Disneyland has become one of the most popular vacation destinations in the world. Combining the Disney atmosphere and the convenience of a major metropolitan city to create an ultimate vacation destination is the mark of Disneyland in California. Disneyland is the source of millions of memories in the eye of children and adults alike and will continue to create those great memories in the future. Disneyland is made up of several distinct areas including the original Disneyland theme park, Disney’s California Adventure, Downtown Disney, and the Disneyland Resort Hotels. 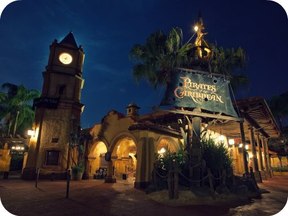 Disneyland California, the inspiration for Magic Kingdom at Disney World, was the original park created by Walt Disney.  Guests first arrive on Main Street, U.S.A where they are met with old world charm and a charming view of Sleeping Beauty’s Castle. Disneyland also is equipped with a Fantasyland section of the park, which is home to classic Disney rides such as Mr. Toad’s Wild Ride, Peter Pan’s Flight, Pinocchio’s Daring Journey, Dumbo the Flying Elephant, the Matterhorn Bobsleds, and others. Tomorrowland is another classic Disney section of this park and includes rides such as Buzz LIghtyear Astro Blasters, the New Finding Nemo Submarine Voyage, AstroOrbiter, Space Mountain, the Disneyland Monorail, and others. Also included in Tomorrowland is the newly renovated Star Tours: The Adventure Continues, and exciting ride for guests of all ages. Mickey’s Toontown, at the rear of the park, includes Gadget’s Go Coaster, Mickey’s House, Minnie’s House, and roger Rabbit’s Car Toon Spin. The Frontierland section of this park is equipped with only one major ride, but it is a Disney classic, Big Thunder Mountain Railroad. The Adventureland section of the park includes one of the most popular rides at Disneyland, Indiana Jones Adventure. It also includes one of the original Walt Disney designed rides, the Jungle Cruise. New Orleans Square is the next section of the park and it is themed mainly after its major attractions Pirates of the Caribbean and the Haunted Mansion. The final section of the park is home to one of the best attractions in Disney history, Splash Mountain. In addition, Critter Country also includes The Many Adventures of Winnie the Pooh and Davy Crockett’s Explorer Canoes. 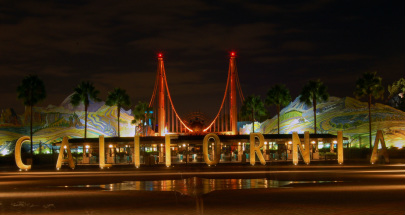 Disneyland also includes a new theme park, opened in 2001, Disney’s California Adventure. This theme park broke the original Disney mold in a sense when it opened as it included more thrill based attractions than Disneyland. Since its opening though Disney has added a number of attractions to California Adventure making this park extremely friendly to young children and families. Upon entering the park guests turn left and enter the Hollywood Pictures Backlot. This section of the park was inspired after Disney’s Hollywood Studios at Walt Disney World in Florida. It includes one of the most realistic rides in all of Disney, The Twilight Zone Tower of Terror. Hollywood Pictures Backlot also includes rides and shows such as Monster’s Inc., Turtle Talk with Crush, Jim Henson’s Muppet Vision 3D, and Disney’s Aladdin – A Musical Spectacular. The Golden State section of the park includes Soarin’ Over California, quite possibly the most popular ride in any Disney park at the current time. This area also includes Grizzly River Run as well as a private park entrance from Disney’s Grand Californian Hotel for Disney resort guests.  “a bug’s land” is a new section to the park added by Disney to increase the things in the park for younger guests. It includes the Heimlich’s Chew Chew Train, Flik’s Fun Flyers, and Fraincis’ Ladybug Boogie, among other children’s rides. It also includes the excellent Disney show It’s Tough to Be a Bug! The final section in California Adventure is Paradise Pier, located in the rear of the park around a lagoon. The keynote attraction here is California Screamin’, a roller coaster with a loop and launched start. Also here is another extremely popular Disney attraction , Toy Story Midway Mania, one of the most technologically advanced rides in the world.

The Downtown Disney area is similar to that at Walt Disney World as it provides excellent shopping and restaurant venues for guests. It is located just between the entrances to the two theme parks and within walking distance of the three Disney hotels. This makes it a very convenient stop for guest in the middle of the day or for a end of the day dinner. Restaurants here include the ESPN Club, House of Blues, and Ralph Brennan’s Jazz Kitchen. The shopping and entertainment value is high here as well with stores and attractions the likes of an AMC Theatres, Build a Bear Workshop, LEGO Imagination Center, Fossil, Studio Disney 365, and California’s largest Disney store: World of Disney. 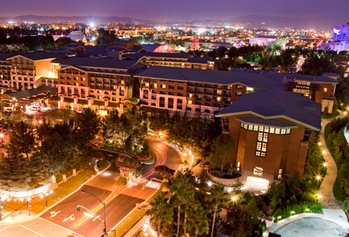 There are three resort hotels at Walt Disney World, all of which would be on the scale of a deluxe hotel if located at the Walt Disney World Resort. The positives of staying onsite at Disneyland are not as great at Disney World, but there are benefits. In addition to being in the Disney spirit 24/7, guests are within walking distance to the parks, have a private entrance to California Adventure, are allowed admittance even if the park gates are closed on extremely busy days, and the convenience of the monorail. There are also a number of off-site options around Disneyland as well that have better prices and are still within walking distance. The Disneyland Hotel was the original hotel at the resort. Paradise Pier was the 2nd build and features a rooftop pool overlooking Disney’s California Adventure park. Paradise Pier is the most budget conscious of the three hotels. The newest hotel is Disney’s Grand California Resort, which sits directly next to Disney’s California Adventure theme park and is an extremely luxurious experience. The Disneyland Resort does also offer its own version of the Disney Dining Plan that has been extremely popular at Walt Disney World. Contact Jon at Big Dreams Travel for more information on the Dining Plan as well as a Disneyland vacation.
CLICK HERE for a free quote on a Southern California vacation from Big Dreams Travel.