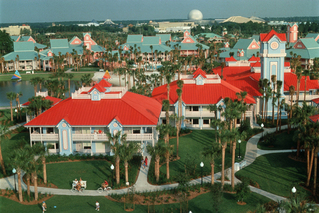 Disney’s Caribbean Beach Resort is a tropical paradise that surrounds a 45 acre Barefoot Bay Lake. You will feel as if you have sailed away to the Caribbean, where you can take in the sun on one of six sand beaches, lay in a hammock on the resorts island, or take in great Caribbean food.

All guest rooms are located in one of six villages named after Caribbean islands, Trinidad North, Trinidad South, Martinique, Barbados, Aruba, and Jamaica. Each village has its only color of buildings and is each situated along the beach of Barefoot Bay. In addition to standard guest rooms the resort also has a supply of Pirate rooms themed after the movie Pirates of the Caribbean. Kids will love these pirate themed rooms that have ship-themed beds as well as other pirate style accessories.

The resort also boasts a marina that has many types of watercraft for rent. Pontoon boats, canoes, paddle boats, and sailboats are all available to guests to explore Barefoot Bay. This resort has many trails throughout which is ideal for jogging or bike riding. In addition to the main pool that includes two water slides, each village has its own quite pool for guests. Caribbean Cay, the island in the middle of Barefoot Bay is accessible from both sides by a bridge and it included hammocks, a playground for children, and nature trail.

The southwest themed Coronado Springs Resort at Disney World is a moderate resort hotel that surrounds the 22 acre Lago Dorado. The romance and spirit of Spanish-colonial Mexico is felt and seen throughout the resort, which is named after the explorer Don Francisco de Coronado. This lakeside vacation destination is extremely romantic, exhilarating, and has a great atmosphere of relaxation and beauty.

The guest rooms at Coronado Springs Resort are made up of three themed areas. The Ranchos section resembles the pueblos seen in the American southwest. The Cabanas are a beachfront area that includes cozy hammocks for relaxations. Finally, the Casitas have a terra-cotta look and feel making it a complete delight. There are several dining options at Coronado Springs, including a food court. There is a gift shop as well as a full service salon at the resort as well.

The main pool features, Siestas Cantina, a poolside bar as well as a 22 person hot tub, which is one of the largest in all of Walt Disney World. The main pool carries a Mayan theme and features a 123 foot long water slide. There is also an arcade for the enjoyment of kids and adults alike. 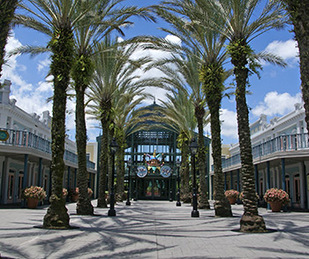 Disney’s Port Orleans French Quarter Resort is themed after the spectacle of the French Quarter district of New Orleans; a place where celebrations happen daily. When you step onto the Port Orleans property you step into a world of jazz music, parades, and excellent Cajun food. The resort has beautiful accents such as cobblestone paths, delicate wrought iron railings, and magnolia blossoms. The theme is magnificent from the street signs to the antique lampposts and fountains.

The main lobby is located in the building called “The Mint”. It also includes the food court what serves American and Creole food, Scat Cat’s Lounge, and a gift shop. There is a one mile long path along the Sassagoula River that leads to the Port Orleans Riverside Resort where you can catch a ride on a horse drawn carriage. The Doubloon Lagoon is the main pool complex that has a water slide that looks like a sea serpent. There is also a playground, arcade, bike rentals, and fishing located on the resort grounds. 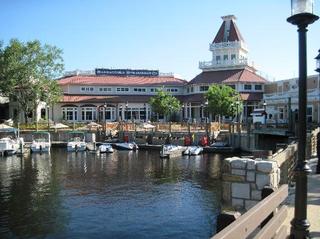 Disney’s Port Orleans Riverside Resort is themed after the Louisiana countryside and is set along the banks of the Sassagoula River. You will think that you have been sent back to a place where the pace of life is just a little slower. This resort has tremendous hospitality, embraces the tradition of the steamboat, and hosts parties in the beautiful gardens. You can take a horse drawn carriage ride as well as feast on southern food favorites.

The guest rooms are separated into two themed areas. Magnolia Bend is themed after mansions with giant white columns, while the Alligator Bayou section is themed after small backwoods cabins. The Riverside resort also has new Royal guest rooms that will allow those who stay in them to be treated to the theme of some of Disney’s favorite princes and princesses.

The main lobby is located in the “Colonel’s Cotton Mill”. It is themed after a steamboat ticket station with large columns coming down from the high ceiling. The Mill also includes shopping, dining, and entertainment establishments. Boatrights Dining Hall is the food court for this resort and features Cajun Specialties as well as some American fare. An arcade is also located inside the main building. Ol’ Man Island, which is encircled by a turn in the Sassagoula River, is home to the resorts large pool area, a fishing hole, and a playground for children. 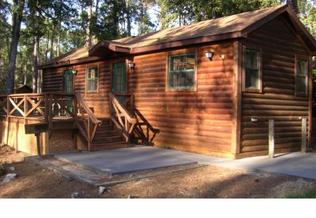 750 acres of pine and cypress trees provide the setting for The Cabins at Disney’s Fort Wilderness Resort. Rustic American charm and a frontier theme are used to make you feel like you are at home in one of these cabins and you feel as though you are far away from civilization. The resort is home to Mickey’s Backyard BBQ, a character dining experience as well as one of the most popular dinner shows at Walt Disney World the Hoop-Dee-Doo Musical Revue. The Fort Wilderness Resort allows you to go on carriage, wagon, or horseback rides as well as tour the property on a Segway transporter. Other restaurants on the property include Trail’s End Restaurant and Crockett’s Tavern. Also, a marina is available at the resort to rent pontoon boats and other watercraft for use on Bay Lake. In addition, fishing expeditions are available to resort guests.

Presented nightly is Chip ‘n’ Dale’s Sing-a-Long, a marshmellow roast, and the playing of a classic Disney movie around the campfire in an outdoor theatre. Walking trails, tennis, volleyball, horseshoes, shuffleboard, archery, bicycle rental, and swimming are all available at Fort Wilderness.

Each cabin is around 500 square feet and has one bedroom, a full bath, living area, patio, charcoal grill, picnic table, and a fully equipped kitchen. The housekeeping staff will also do the dishes for you each day. The resort features the “Meadow Swimmin’ Hole” which includes a play area for little children, a water slide, and a spa. There are two different arcades on site as well as child care available if the parents want a night alone.